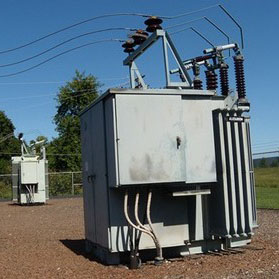 GIC-xxxz transducers are able to measure DC currents in the presence of higher levels of AC. This enables accurate measurement of Geomagnetically Induced Currents (GIC) on power grids, and of the DC components potentially present in Photo-Voltaic systems and inverters. Hall Effect sensors such as our GIC, are commonly installed on the transformer's neutral-to-ground wire.

The Hall Effect transducer operates over a wide dynamic range and maintains low-level accuracy even after a large over-range. The GIC's inherently low residual effect eliminates the need to degauss in all but extreme circumstances. The split-core enclosure, with captive hardware and outdoor rating, makes installation easy and does not require circuit interruption. One doesn’t naturally connect solar activity with Electric Utility disruptions, but Utility operators are keenly aware of the Sun’s impact on their systems and stability.

The Sun occasionally experiences Coronal Mass Ejections or CME’s.  These “flares” release a shockwave of solar energetic particles, which in turn affect the Aural Electrojet Currents.  These Currents can reach millions of Amperes and impact the Earth’s magnetic field by inducing electric fields along the surface of the earth, creating potentials on the Earth’s surface.

The field variations are slow in contrast to the system frequency and appear as quasi DC currents.

Grounded Neutral connections, common to many EHV transformers, complete a low resistance DC circuit that permits these DC currents to flow in the transformers.  Unfortunately, the Transformer’s cores saturate at very low levels of DC.

All of which combine to make early detection of rising GIC’s critical.

GIC DC currents are normally detected in the neutral of the transformers, which in itself, is not difficult; however, it becomes challenging when the DC must be measured in the presence of significantly larger AC currents.  In addition, fault conditions can result in AC currents that exceed 100 X the DC current detection level.  Conventional detection methods have experienced significant residual after these events, which requires a physical site visit to De-gauss the device and remove the residual “set”.

OSI has created a device to simultaneously measure both the low-level DC currents associated with Solar events as well as the AC currents normally flowing in the neutral.

The device does not require degaussing following a fault event. The Utility maintains continuous monitoring without the delay and expense of a crew dispatch to degauss the device.

Chat with us for more information, including pricing and availability.